Prior to the new integration, GPB used two distinct workflows for different types of audio content. SGrecast was used only for pre-produced podcast episodes, which operators uploaded directly into SGrecast along with corresponding metadata for automated publishing and distribution. Non-podcast audio clips such as sound bites and story reads, which accompany articles on GPB’s news website, were handled separately. When the broadcaster merged its dedicated news portal into the main GPB.org site last year, the team took the opportunity to combine its behind-the-scenes audio processes.

“Our main GPB.org site wasn’t set up to serve audio files, so we needed a good place to host its new audio content,” said Carl Zornes, director of digital media, GPB. “We were already using SGrecast very successfully to host our podcasts, so we decided to expand its use to both content types. Bringing our podcasts and news audio clips together in our website CMS would also remove some manual steps for our podcast producers.” 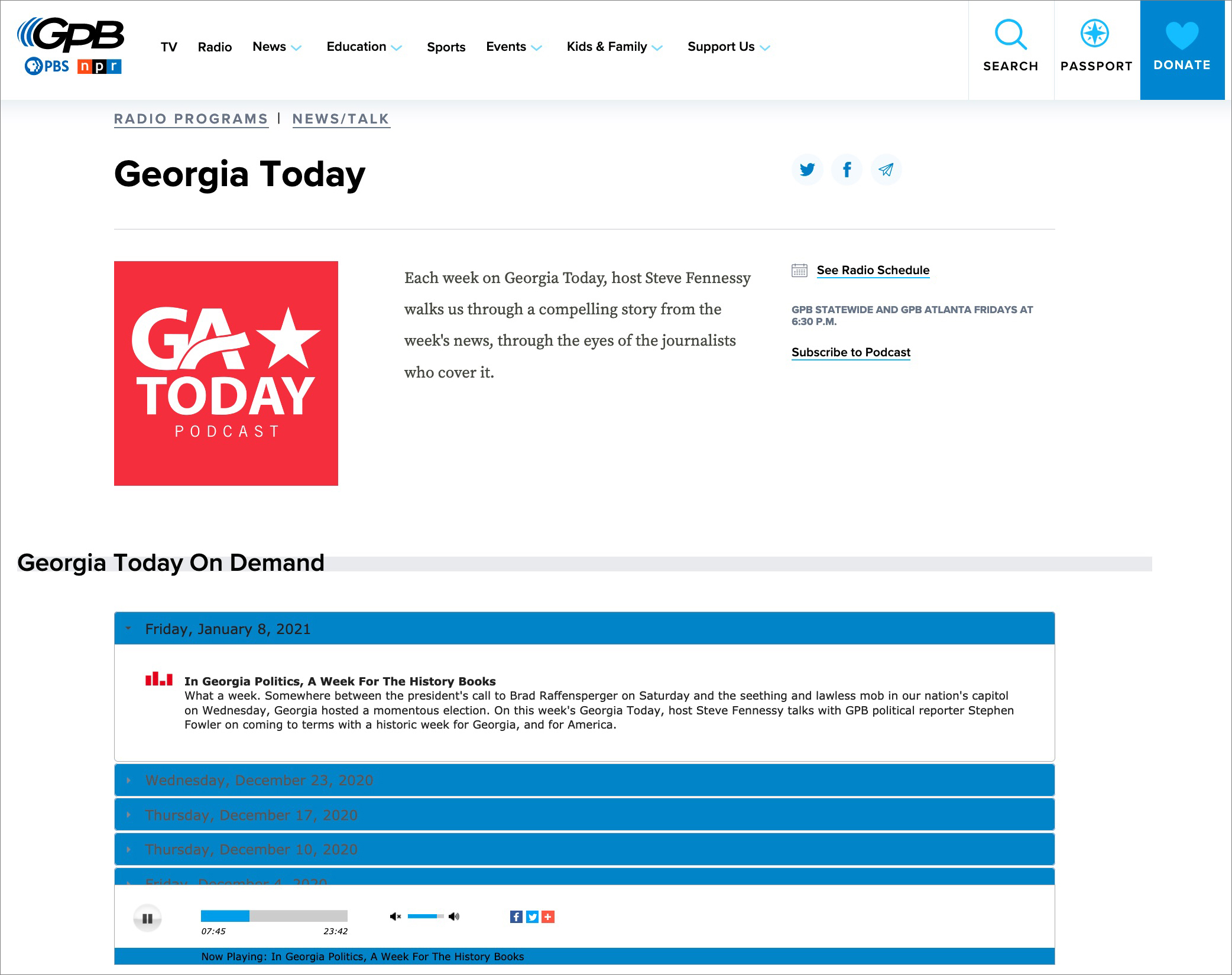 Pictured Above: GPB's podcasting archive landing smoothly laid out on their website.

GPB and its website developers, Lullabot, used StreamGuys’ just-released API to let producers and news reporters submit both podcasts and general audio content to SGrecast through the same CMS interface.

“Uploading audio clips to SGrecast is now fully automated through the CMS,” explained Zornes. “When creating an article, a user clicks to add audio just as if they were uploading an image to the website. If it’s only intended for the website, the user doesn’t need to go through any podcast-related steps – the audio is automatically sent to SGrecast for storage and hosting, and it will be rendered within the article on our site. However, if the user checks the option in the CMS to make the audio part of a podcast, they can also get a list of all the podcasts available in SGrecast. They select which podcast to attach the audio to, and once the content is approved by an editor and published in the CMS, an automated API call triggers SGrecast to add the content to the podcast feed and distribute it to our target outlets. The only time a podcast producer now goes manually into SGrecast is to insert ad markers.”

Pictured Above: A snippet of GPB utilizing SGrecast to upload sports audio programming into their system for playout.

A second SGrecast integration simplifies the creation of website landing pages for GPB’s podcasts. When crafting such pages in the website CMS, an API call embeds an instance of StreamGuys’ SGplayer multimedia player using SGrecast’s unique ID for that podcast. When listeners subsequently visit the published landing page, the player appears automatically, including a dynamically updated episode list.

GPB’s new API-driven audio publishing workflow went live in June 2020, just as demand for their digital content took off. “With students learning from home because of the pandemic, our partnership with our State Department of Education is bringing more people to our website,” said Zornes. “We also stream live press conferences for our Governor and Secretary of State, and with Georgia’s key role in the 2020 elections, all eyes and ears have been on our state. It has been a banner year for our content.”

In addition to the time savings afforded by the new API integration, Zornes praises the rich metrics provided by StreamGuys’ software suite and the overall publishing efficiency of SGrecast. “I love the analytics we get from SGrecast and SGreports,” he elaborated. “I like to slice and dice our metrics to understand our audience better, and the data we get from StreamGuys is phenomenal. I also appreciate that we can build one podcast feed and identify all the different providers we want to send it to. We only have to do that once, and we’re covered everywhere, whether it’s five places or two dozen.”

GPB’s key initiatives for 2021 include further expansion of these distribution outlets, with plans to add Google News and Apple News alongside roughly 20 existing partnerships that include Apple Podcasts, Stitcher, and Spotify. Zornes notes that as GPB’s digital reach continues to grow, so too will its use of SGrecast. “SGrecast makes it so easy for us to expand to new outlets,” he concluded. “My responsibility is to make our content available wherever our users expect us to be. Whatever’s next, we’ll be using StreamGuys to reach it.”

Press Release Read it in the Press: Radio OnlineRBRVidestreamRed Tech Tribe Back to News

A collection of case studies over StreamGuys' long record of service and partnerships.

Technical Papers freely accessible by signing up for our Newsletter

Subscribe to our RSS feed to get updates to our news as soon as possible. StreamGuys RSS Feed